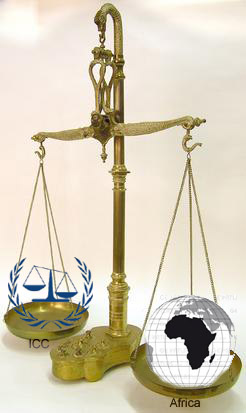 The International Criminal Court (ICC) is the pseudo judicial arm of the United Nations Organisation. It is a permanent tribunal created to end the impunity enjoyed by the so called strong men of every member state who have committed crimes atrocities against their citizens. It is a tribunal to prosecute individuals for genocide, crimes against humanity and other war crimes.

Ever since it’s creation, the court has initiated investigations into  eight situations in Africa namely:

Sierra Leone should be on the list, but remains an exception because a special court was created to address the crime committed during the conflict. Those investigations under the SCSL led to the arrest, trial and sentencing of former war-lord and president of Liberia Charles Taylor.

Though the case for Sierra Leone was dealt with under a Special Court for Sierra Leone (SCSL) and not the ICC, the African community ICC sceptics draw no line between the ICC and the SCSL. Many still consider the SCSL an organ of the ICC.

Over the last few years, the ICC has had a turbulent relationship with Africa, given that the court is being accused of selective justice and biased toward African leaders.  It has led to a situation where some countries are threatening to leave the ICC.

Of the eight  investigations opened across Africa so far, four were referred to the Court by the concerned states parties themselves (Uganda, Democratic Republic of the Congo, Central African Republic and Mali), two were referred by the United Nations Security Council (Darfur and Libya) and two were begun proprio motu  by the Prosecutor (Kenya and Côte d'Ivoire)

It is worth noting that not every member of the United Nations is a party to the Treaty that established  the ICC. Three countries namely; USA, Isreal and Sudan unsigned the treaty and the US  has gone a step further to sign bilateral agreements with individual countries to ensure impunity of their citizens. Impying that even if those citizens are indicted by the ICC for war crimes, they are under no obligation to hand them over to the ICC.

The Court's Pre-Trial Chambers have publicly indicted 30 people mostly from Africa, proceedings against 23 of whom are ongoing. The ICC has issued arrest warrants for 21 individuals and summonses to nine others. Five individuals are in custody; one of them has been found guilty and sentenced (with an appeal lodged), three are being tried and one's confirmation of charges hearing has yet to begin.

Some experts do however argue that the accusations levied against the ICC with regards to Africa are misplaced.